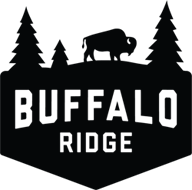 “How are bison (buffalo) different than cattle?” I field this question all the time, and the answer boils down to what’s the difference between a wild animal and a domesticated one.

Cattle began domestication about 10,500 years ago presumably in the Fertile Crescent region of what is now Iraq. Over they millennia, they have been selectively bred to develop desirable characteristics such as muscling, milk production, temperament, and even loss of horns. Bison have not been domesticated, that is selectively bred for certain characteristics not necessarily in line with their natural physical and behavioral attributes. Therefore, bison are considered wild and must be managed thoughtfully and with respect to maintain a happy herd and a safer environment for their handlers.

Bison in the pasture behave very similarly to cattle. Their number one priority is to eat grass! They stay in close proximity to their herd mates – an adaptation that has served them well. With more eyes and ears (and noses!) on the scene, they are better able to detect a threat to the herd and instantly alert the whole herd due to their natural cohesiveness. They spend their days grazing, resting, and occasionally drumming up some playtime with a romp around the pasture or some head-butting.

Because bison have been adapting to our climate since their ancestors crossed the Bering Strait approximately 500,000 years ago. They have an almost unbelievable ability to “weather” anything Mother Nature throws at them from extreme cold to extreme heat. In fact, the cold doesn’t appear to bother them in the least. It’s the relentless summer heat that will slow them down. They sweat and pant and generally will spend more time in the shade resting. Cattle, on the other hand, are known to struggle with the extremes in weather and are more susceptible to dying from the stress particularly due to cold weather events.

The biggest difference between cattle and bison is how they behave when handled, i.e. working them in the chutes. A number of diseases were brought to North America by cattle. Bison and cattle both require yearly vaccinations to help keep these diseases at bay. Therefore, it is necessary to have a corral and working chutes that hold the animal in place, so we can administer to them without them getting hurt or hurting one of us. Cattle don’t exactly appreciate the process, but bison positively hate it! Bison have all their survival instincts fully intact, and there is nothing more terrifying to them than being trapped with no way out. With thoughtful handling and well-designed facilities, we can substantially reduce their stress, but we can never be complacent around them. You don’t want to ever find yourself in the way of a scared 2000 lb buffalo!

Though bison are generally calm and peaceful creatures, they are very much wild and must be treated with great care and respect. Being cognizant of the differences as well as the similarities between cattle and bison is very important in devising an effective management strategy. The more educated we are, the happier our buffalo herd!